Hague Quality Water International in Groveport, Ohio is one of the leading manufacturers of residential water treatment equipment. The company manufactures in a state-of-the-art facility with 11 Engel injection molding machines and runs a variety of engineering resins that include ABS, polyurethane 40% glass-filled, Acetal and Nylon. Mike McCoy noted that royal blue ABS is the most difficult material to purge when they switch from blue ABS to a dark gray ABS and then to a light gray ABS. Often, Hague would still have streaks of blue in the light gray parts, even after running 500 dark gray parts.

“Using our previous purging method, it was common for us to scrap 50 parts throughout the run of light colored parts, as we would get random blue streaks,” he said. “With New Dyna-Purge® E2, we went from the blue ABS straight to the light gray parts and only had to scrap two or three parts!” Hague Water Quality International was also able to reduce machine downtime by more than an hour per machine for significant labor savings using New Dyna-Purge® E2. 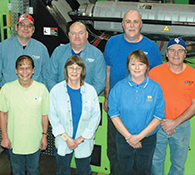 New Dyna-Purge® E2 cut total machine downtime by more than an hour for each machine at Hague. 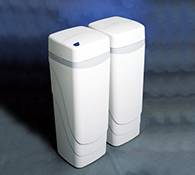