“Dyna-Purge® K for shutdown enables us to jump back into production for the next day.”

For over 30 years, Queplex of St.–Leonard, Quebec, Canada, has been a leading producer of PVC extrusions and profiles used in window blinds and valances. The company utilizes six Davis Standard/Milacron machines with 65mm screws, operating at barrel temperatures from 325° to 365° F. The company purges the machines at various times during the week, and every machine is shutdown on Saturday. Dyna-Purge® recommended using Dyna-Purge® K at shutdown in order to increase start-up efficiency and reduce scrap when the machines are re-started on Monday. The barrel is kept full of Dyna-Purge K, which is purged out with production resin at start-up. Adriano Stocchero, Vice President of Operations and Resources at Queplex, said the recommendation has helped speed production, reduce scrap and cut the total cost-to-purge.

“We would never leave a production resin in the machines over the weekend, because it would burn and cause delays at start-up,” Adriano explained. “Now, we leave Dyna-Purge® K in the barrel over the weekend, we use our compound to push out the purge and jump right into production the next day. The extrusion pieces are clean from the start.” Dyna-Purge K has resulted in cost savings for Queplex, as they have cut the amount of purge compound used by more than 50%. What’s more, they have reduced machine downtime by 30%. 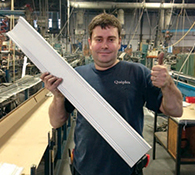 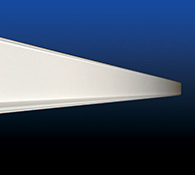