The Proof is in the Purging

With the dramatic increase in material costs, it becomes more and more essential for molders to decrease scrap rates and machine downtime while molding contamination-free parts. Many have turned to purging compounds to clean out the machine for color changes or periodic preventive maintenance, while others use in-house resins.

A subsidiary of Network Polymers, Diamond is a full-service material supplier that also designs thermoplastic material for specific applications. Both companies are certified to ISO 9001:2000 quality standards, and Diamond’s laboratory holds A2IA accreditation from the American Assn. for Laboratory Accreditation for Mechanical Testing.

For the study, Diamond Polymers tested four types of resins- PP, HDPE, PC, and ABS- against Dyna-Purge M. All trials were conducted on a Battenfeld BA600 66-ton injection machine. Prior to each trial, a white control part was molded for comparison purposes, and the same protocol was applied for each test.

To start, 100g of black resin was run in the machine, which was then purged until clean and natural in color. The amount of purge used was measured and recorded, as well as the time required to purge. Then a postpurge was performed with white resin until no purge was evident, with the time and amount of postpurge resin measured. Next, parts were produced until they were visibly comparable to the control part, with the weight and number of scrap parts recorded. Lastly, the parts and the purge were photographed for each test trial.

The results are in

Since the in-house resins are not formulated to clean the machine, they required five to 10 times more resin to attempt to displace the resident material than a commercial purging compound. The results of this study concluded that Dyna-Purge lowered purging cost by 62% compared to purging with ABS, 73% vs purging with PC, 82% lower than HDPE, and 87% vs purging with PP. Aside from the cost savings, other results included a reduced amount of scrap from rejected parts, minimal machine downtime, and maximized production. When using a commercial product and following the manufacturer’s purging procedure, it can lead to more consistent results that minimize the impact of material or operator variables, which can help a molding operation remain competitive during a time of high material and energy costs. 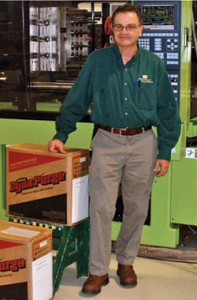 Brent Borgerson used his prior purging knowledge to create a program for Matrix Tooling that resulted in 68% cost reduction. Medical molder saves with purging program Brent Borgerson knows all about the benefits of purging compounds. This senior process engineer at Matrix Tooling Inc. (Wood Dale, IL), a custom molder and moldmaker for the medical industry, initiated a switch from purging with in-house resins to Dyna-Purge about five years ago, and started to quantify the effects about two years ago- revealing some drastic results.

Before the switch, Matrix was experiencing unfavorable scrap rates and rejections due to material or color contamination from the purging process, which took place an average of six times daily. Labor and material costs from purging were calculated at $35.25 per purge, so alternative methods were investigated on a 28-ton Arburg with a screw size of 18 mm and barrel temperatures ranging from 380-600° F using a cold runner system. Borgerson previously had done a study while working for Portola Packaging in Mexico, a cap and closure manufacturer performing 10-20 color changes per day. By following a new color change program using Dyna-Purge, the company was seeing savings of $10,000/day. He decided to try Dyna-Purge M at Matrix to see what the results would be.

The reject rate improved dramatically, and the average cost per purge was calculated at $11.13, a 68% improvement. This represents an annual savings of $41,000, with a reduction in purging time of 75%.

Matrix has also found benefits in some of the other Dyna-Purge products, using the P grade in hot runner manifolds and the E grade when going from one high-heat material to another. “We don’t break screws and tips since we’ve gone to a disciplined, structured purging program. We’ll go from running polyetherimide (PEI) at temperatures around 700°F to a material at 320°F,” says Borgerson.