Since 1982, Currier Plastics has been custom molding for a variety of industries including plastic packaging, beauty and cosmetics, household consumables, electronic connectors and medical measuring devices. Their facility in Auburn, NY operates six injection stretch blow molding (ISBM) machines to produce clear PET bottles. The machines are purged 1 to 5 times per week to flush out color after a color run. According to Currier Plastics Cell Engineer Rob Caruana, the company had tried different purging products in the past but none worked to their satisfaction. Instead, they were running PET through the machines until the color cleared up – an expensive and time consuming process. “Some colors could take as much as 15 boxes of PET to clear out,” reported Rob.

Currier Plastics began to use Dyna-Purge D2 purging compound after color runs and before production of the PET bottles. “We are using Dyna-Purge D2 and running it through the hot runner,” Rob said. “The D2 works a lot better.” The company now uses only 5 pounds of DynaPurge D2 during changeovers, with downtime being reduced by two-thirds. Based on these results, Currier has begun using Dyna-Purge D2 to purge its extrusion blow molding (EBM) machines. 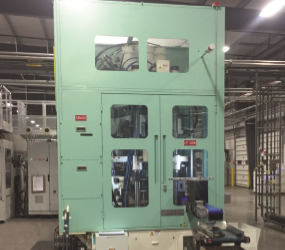 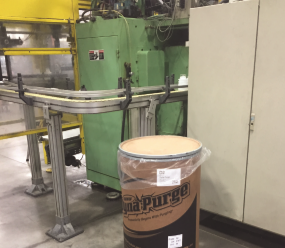 Dyna-Purge D2 provides a money-saving solution for the company’s ISBM machines as well as EBM equipment.